I was born in Kentucky but grew up on the Eastern Shore of Maryland. That's the part next to Delaware, on the other side of the Chesapeake Bay. I went boating a lot and developed a taste for crab cakes. My father liked to hunt, but I didn't have the stomach for it. It seemed so unnecessary. I preferred reading and taking apart old radios.

One thing I did get from my parents was a fascination for language. They were always reading, and as soon as I was old enough I read a lot too. Early favorites included Mark Twain and Beverly Cleary, and when I developed an interest in writing, my inspiration came from them. A few years later, I discovered The Pigman and The Outsiders. Wow. These were characters I could relate to. And the language! So real! Who knew that you could write like that and get away with it? I kept thinking, "Has anyone told our parents about these books?" Like maybe they would take them away if they knew.

At thirteen, I was shipped off to the Mercersburg Academy, a boarding school in Pennsylvania. I did well academically, made captain of the fencing team, president of the film society, and poetry editor of the literary magazine. (None of that stuff was nearly as impressive as it sounds.) I read Shakespeare and stuff, but I was more affected by A Separate Peace and The Catcher in the Rye. It was as if John Knowles and J. D. Salinger had written them just for me.

Next came Vassar College. Now, I'd been a pretty bright kid at Mercersburg. But Vassar was full of bright kids. Suddenly I was average. I actually had to work to keep up my grades. The only talent I really had was writing. I took every creative writing class that Vassar offered. Eventually I wrote a thesis that was almost, but not quite, a novel. I don't mean it wasn't long enough. I mean I didn't quite understand the way novels worked. Plotting was especially mysterious.

Until I was fourteen I spent my summers at camp. There was a camp in Delaware I liked a lot. The counselors were high-school seniors and college students, and we spent a lot of time tie-dying our clothes and singing war-protest songs. I bet a lot of kids I went to camp with there grew up to be teachers and social workers. There was a camp in North Carolina that I hated. The counselors were mean. If you weren't paddling a canoe or climbing a rock every minute of every day, they yelled at you. The kids who went there are probably selling junk bonds or cooking up scandals in Washington.

When I was too old for camp, I spent my summers working at a Renaissance fair in Wisconsin. My friends there were aging hippies and draft dodgers. They were silversmiths and potters, people who crafted beautiful things with their hands. They moved from fair to fair, all around the country, and they slept in their shops or school buses parked where the customers couldn't see them. (There was a whole other world where the customers couldn't see it.)

One night there was a fire. One of the concessions had gone up, and the flames were moving from shop to shop. All those shelves filled with beautiful things! You never saw such cooperation. At three in the morning, a bunch of tired, naked craftspeople running around, moving propane tanks, rescuing merchandise. And it was hot. I and another guy carried propane tanks away from the blaze. (Trust me: carrying an 80-pound bomb has a curious way of focusing the mind.) A woman sprayed us with a garden hose every time we passed her, and by the time we passed her again we were completely dry. We saved almost everything, though, and only one tank blew up. Except for a few cuts and blisters, no one got hurt. Here's the weird thing: for the next couple of days, I just couldn't get the fire out of my mind. It was as if the entire world had changed for me. I kept thinking, "What am I supposed to do now?"

After Vassar, to earn enough money for graduate school, I spent a year selling men's clothing at a big-and-tall store. It wasn't as much fun as the Renaissance fair, but the pay was steady. I learned that there is one simple rule to selling men's suits. If you can get your customer to try on the pants, you've made the sale. I'm still not entirely sure how that works, though I have a few ideas.

For a while, I studied creative writing at the University of Illinois at Chicago. At the time, it seemed like the right thing to do. From everything I'd read, a writing program was the place to be trained as a writer. Today, I'm not so sure. Don't get me wrong; the experience was great. But I've also met a lot of excellent writers who've trained themselves. The most important things, I think, are a drive to make sentences, thousands of sentences, and a willingness to scratch them all out and try again.

Today, I teach English at Snow College in Central Utah. It's a beautiful place to live. I do some writing here, too. 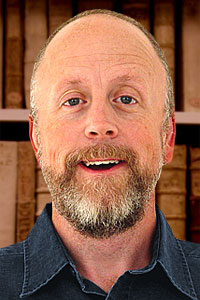